Evermore by Alyson Noel
My Grade: C
Setting:
This story is about a girl named Ever who is the sole survivor of a car crash that killed the rest of her family: Mom, Dad, Sister, and dog. She moves in with her aunt and changes schools. She becomes withdrawn and antisocial, hanging out with a goth girl and a gay boy - the misfits. Part of the reason for this is because the accident gave her the ability to see people's auras, read their minds and know their life story by touching them. At her old school she was a popular cheerleader, but here the popular kids tease her. One day a new boy arrives at school and gives her a red tulip and silences the voices in her head. She is enthralled, and typical high school romance ensues. It's a good premise for a teen novel, even similar to Twilight's. But alas, it is leagues inferior to everyone's favorite vampire book. This turns out to be a copycat, trying to cash in on a popular trend but sadly is nowhere near as good as the original.
My thoughts:
Overall, this book is mediocre. I don't really know why it gets so much publicity over other better books geared for teenage girls. There was nothing particularly special about the story or the writing that stood out to me as something that makes this a really great book. In fact, I found the present tense format to be quite jarring. I don't think the author has the writing talent to be able to pull off a full-length novel written in the present tense. Since most narratives are written in past tense, it usually feels awkward reading in the present tense unless the author is skillful enough to make you not notice it after a while. This didn't happen in Evermore. Every time I picked it up the wording felt cumbersome.
I kept waiting for the 'good part,' as I call it. You know, the part usually just past the middle where the clues leading up to that point come together to tell you what's really going on, or where your suspicion that someone who looks like an ordinary person is really magical or mythical in some way are confirmed. But it wasn't there, at least not until the very end. And when it happened it wasn't very exciting, or not explained well. At least not well enough for me to remember it a few months after reading the book, which is when I am writing this review.
One part I really didn't like was how Ever had a relationship with her sister's ghost for a large part of the story. The way it was done seemed corny to me. There was too much of that and not enough of Ever's aunt's friend the psychic, whom Ever wanted nothing to do with. I wish that conflict had played out a bit more and the author had dug a bit deeper into the real nature of Ever's abilities. Having a psychic who was willing to help but never really did seemed like a wasted opportunity. She would have been a perfect character to use as a vehicle through which Ever could better understand and gain control of her abilities.
Another thing I didn't like was how I didn't see what Ever and every other girl at her school saw in Damen, the mysterious new boy. I couldn't get excited about him the way she did, I didn't even really like him sometimes. This could just be personal preference, but it made me disinterested in the story.
Overall there was no spark. The whole story felt dull, despite supernatural abilities and mysteries contained in the plot.
Alyson Noel's website has quotes from critics saying her Immortal series is "addictive" "beautiful" "haunting" and "mesmerizing." I guess they were reading a different book than I was. Or maybe it gets phenomenally better in the second and third installments. But based on the story structure and the style of writing, I doubt it. And besides, first impressions are the most important; you need to make your readers fall in love with your characters from the get-go, so they are hooked and yearning for more. But I know I sound harsh. This isn't the worst book I've read by any means. It's great for a high school girl who just wants some light escapism. All I'm saying is it didn't capture me and sweep me away the way some books do (Most recently, The Twilight Saga). 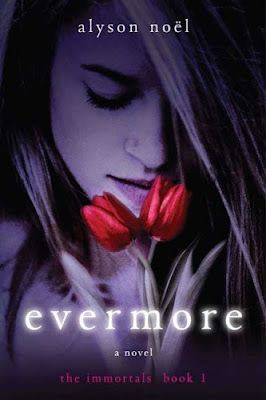 I bought Evermore and its sequel, Blue Moon, at the same time as I assumed from the popularity of this series that it would be worth reading more than just the first book. Unfortunately I was wrong, and I have little interest in continuing to read the series.


Visit the author's website: http://www.alysonnoel.com/
Posted by BC at 12:42 PM