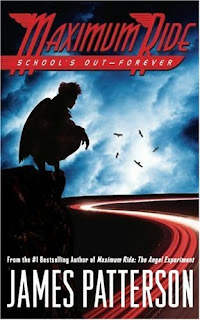 Synopsis from GoodReads.com: In this stand-alone sequel to The Angel Experiment, bird-kid Max and her flock fly south to reunite with their parents. But their perilous mission runs into stiff winds when they are apprehended by an FBI agent who dispatches them to the worst nightmare destination: school! Max's homework assignment include decoding documents that might have help save the world and protect her from Max II, a clone who knows her every move. Action; suspense; plot surprises: all James Patterson specialties.

I decided to listen to an abridged version of this book just to see what it was like. Several elements led me to this curiosity. First, my grandfather's name is James Patterson and alot of people mistake him for the author. Second, the middle-schoolers I nanny absolutely love the Maximum Ride series and have gobbled up every Maximum-Ride-related book available. I started to read The Angel Experiment (first book in the series), and found it was just too juvenile to hold my interest. But - and I've mentioned this before - while I couldn't seem to be bothered to sit and read The Angle Experiment, I found listening to a recording of School's Out - Forever, quite enjoyable. A fun, clever story to listen to but again, I doubt it would have held my attention if I had had to commit to sitting down and reading it.

The characters are all well developed, each with a qualifying trait that makes them easy to distinguish. The plot keeps moving forward and never drags (this might have been a product of listening to the abridged version, but even so, I found that I missed the omitted parts and could tell there was more that would have added to the story without bogging it down). However, the dialogue is filled with cliches an pithy aphorisms that make the whole thing feel too sleek and commercial. Even the title is corny and over-the-top. While I've never read any of Patterson's novels for adults, I know it is pop-culture candy in the vein of Romantic Comedy movies and easy reading Chick-Lit. With the Maximum Ride series Patterson has produced something not often seen in children's fiction: mass-produced candy-coated adventure for the budding youth. There is a reason why the kids I nanny, who read everything from Moby Dick to Twilight, love this series so much. It's fun. It's light. It's fluffy, and it's feel-good - if insubstantial - entertainment on a level youthful enough to be at their level, but with a plot exciting enough to hold my interest while commuting to their house.

Find it on Amazon: School's Out - Forever (Maximum Ride, Book 2)

Visit the author's website: http://www.jamespatterson.com/books_max.php
Posted by BC at 6:08 PM