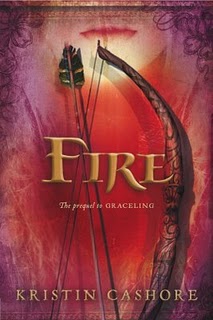 Synopsis from GoodReads.com: Beautiful creatures called monsters live in the Dells. Monsters have the shape of normal animals: mountain lions, dragonflies, horses, fish. But the hair or scales or feathers of monsters are gorgeously colored-- fuchsia, turquoise, sparkly bronze, iridescent green-- and their minds have the power to control the minds of humans.

Seventeen-year-old Fire is the last remaining human-shaped monster in the Dells. Gorgeously monstrous in body and mind but with a human appreciation of right and wrong, she is hated and mistrusted by just about everyone, and this book is her story.

I decided to read/listen to the audio book Fire because I unexpectedly enjoyed Cashore's first book, Graceling, and Fire is the prequel to that. However, I sadly did not enjoy this book as much as I had hoped I would, mainly because I felt there was no emotional resonance, which is what I so enjoyed in Graceling. There were so many characters to keep track of and so many different couplings and love lives, agendas, and motivations that ruled each character, it was hard to connect with any of them. While Fire was clearly the protagonist, I still did not feel like I could connect with her or any of the characters enough to really really care about them the way I cared about Katsa and Po from Graceling. Even Fire's and Brigan's unlikely love story did not pull me in the way I expected it to. I could have gone either way where that relationship was concerned, and as the reader I should have much stronger feelings about it. Yet, the book was not based around relationships but larger events such as the war between King Nash and the rebel Lords Mydogg and Gentian. But that is no excuse. The characters and the relationships between the characters should be just as well developed as the plot.

Here are my main pet-peeves with this book:

I don't like the name Fire. I think it sounds silly, even if her hair is every color of the red-orange-pink spectrum. Speaking of her hair - I understand that Fire's hair is the one determining feature that distinguished her as a monster, but she seemed a bit too preoccupied with it. Describing it, what is was doing, if it was showing or not, if it was up or down. It got a bit tiresome even for me and I'm a girl who sometimes has a similar preoccupation!

This book is an odd creature. I say that because elements it contains, like the hair thing, would make you think it was written expressly for the female audience. Example number two to support this theory is another preoccupation Fire had with a feminine feature: her 'bleeding times.' Seriously, every time it happened she had to talk about it! Yes, we understand that monster blood attracts other monsters and so puts Fire in more danger, but it was not so integral to the story that it needed to be mentioned so often. "Another month had passed, and her bleeding time was on her again..." Just too stressed. But on the other hand, this book is full of soldiers, swords, raptor-monsters (similar to dragons), castles, twisted court intrigue, treachery, murderous plots, and schemes. Everything that the male fantasy audience enjoys. (But then again, I am led to believe the vast majority of young adult males don't read very much at all for pleasure anyways.)
I didn't really enjoy the adultery, casual friends-with-benefits arrangements, and premarital sex that occurred so much in the book. Maybe this book is based on a different axis of morality than the real world, but seeing has how Fire felt betrayed when she learned that an upstanding character was indeed adulterous by the end of the book suggests that she does pivot on a moral axis similar to our own. Therefore, I do not think the way this book treats sex and love is very exemplary for young girls who read it. Also, Fire is only seventeen but she acts like she's twenty-seven, and again maybe that's because she's a monster and not a normal human girl. But the maturity with which she went about having casual sex with her best friend Archer and the assurance and confidence she seems to have as she goes about helping the princes and the king with the wars just doesn't seem likely for a teenager.
Fire is hard to relate to because of the fact that she's not human, but a monster in the shape of a human. Strange ideas like this can win me over if written well. But while interesting to read, Fire just didn't fully convert me to this idea of a non-human protagonist. All her abilities made her too foreign. And that in itself is not what makes her hard to relate to (how many beloved superhero stories are there out there?). It's the fact that her powers are such a part of who she is, how she views the world, and how she interacts with other people. Fire can manipulate people's emotions and tap into their minds and make them believe things that aren't real or that they wouldn't normally believe, things like that. Such a character must have been thrilling to write. What implications there are for a person who can do such things!  But I needed that interpersonal element, that flaw or vulnerability, and it just wasn't there. Fire didn't let us in, in a way. She put up her strong front even to the reader. She never broke down, never showed us the stakes were too high for her. Even in challeneging situations, she was mostly sure of herself. Maybe I think she's just too perfect, even if her powers allow her to be all that I just described.
There's no central story thread. Fire goes here then there and helps with war strategy but you don't get the sense that the book is really about anything until you're halfway through. There was way too much set up as well, where she explained the history of the princes' and current king's father and Fire's father, who are both dead. Cashore invested alot of her story in Fire's father, Cansrel, describing his personalty, his views, his traits - and this is a character who is dead before the book even begins. I understand why Cashore wanted all that back-story since it informs Fire's views and decisions, but we didn't need quite so much of it to understand its purpose.

I hate writing reviews that sound so harsh. But that's just my honest opinion of the book! It wasn't a bad book by any means but it just wasn't something I greatly enjoyed either.

Find it on Amazon: Fire

Visit the author's website: http://kristincashore.blogspot.com/
Posted by BC at 2:24 PM