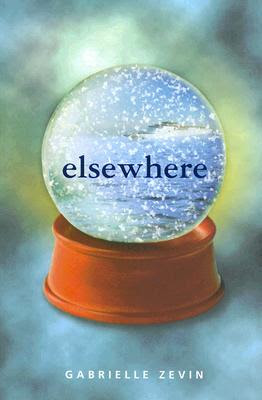 
Published:May 15, 2005 by Square Fish
Word Count: 60,779
Series: n/a
Source: library audiobook
My Grade: C
Synopsis from GoodReads.com: Welcome to Elsewhere. It is warm, with a breeze, and the beaches are marvelous. It’s quiet and peaceful. You can’t get sick or any older...
Elsewhere is where fifteen-year-old Liz Hall ends up, after she has died. It is a place so like Earth, yet completely different. Here Liz will age backward from the day of her death until she becomes a baby again and returns to Earth. But Liz wants to turn sixteen, not fourteen again. She wants to get her driver’s license. She wants to graduate from high school and go to college. And now that she’s dead, Liz is being forced to live a life she doesn’t want with a grandmother she has only just met. And it is not going well. How can Liz let go of the only life she has ever known and embrace a new one? Is it possible that a life lived in reverse is no different from a life lived forward?
This moving, often funny book about grief, death, and loss will stay with the reader long after the last page is turned.
This book starts out with a good idea, but doesn't fully deliver. The author commits to tackling a heavy issue like teenage death, but then seems afraid to fully wrestle with the strife that that involves, instead staying on the light side of things like talking to dogs and getting a driver's license. Overall the book felt like wasted potential, failing to plunge to the depths of the issues it presents. It was like eating only the icing on a piece of cake.

I thought the way the author handled the love triangle between Owen, Emily and Liz was too simplistic and juvenile, and did not reflect the complexities that such a situation would involve. Owen was married to Emily on Earth, but died and since fell in love with Liz in Elsewhere. When Emily also dies and joins Owen in Elsewhere, he gives up Liz but soon finds he is no longer in love with Emily. This problem is nicely solved by Emily volunteering to leave, and the rest of the book continues with Owen and Liz's relationship like the whole episode never happened. That just rubbed me the wrong way.

I kept thinking the book was over after Owen rescued Liz from her batched attempt to float back to Earth with the babies. But it just kept going on and on, indicating an ill-placed climax and awkward pacing.

Head-hopping! Ahhh!! I can't stand it! It's always so blatantly obvious and it really pulls me out of the story.

One reviewer on GoodReads.com says this book reads like a hallmark movie, sappy and hopelessly predictable. That's as good an estimation as I've seen of Elsewhere.
Find it on Amazon: Elsewhere

Visit the author's website: http://www.memoirsofa.com/Elsewhere.html
Posted by BC at 1:39 PM