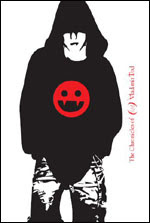 This may not be the best title for teenagers who are trying to convince their parents that what they’re reading isn’t trash. Certainly in my house growing up, saying something ‘bites’ was considered crass. And it’s cousin, ‘suck’ was even worse. I guess it’s a good thing the sequel is called Ninth Grade Slays instead of Ninth Grade Sucks. Isn’t it funny how these common slang words fit so nicely into stories about vampires? They make for a cute play-on-words in any case. I guess one good thing this book’s title has going for it is that the cover art doesn’t actually feature the title, only the series title, which is much more generic. Overall they are definitely marketed as boys’ books. But that’s not why I picked it up.

I read this book because the protagonist is thirteen years old and in eighth grade. Since my protagonist happens to have these stats as well, I wanted to compare her to other current fictional thirteen-year-olds to see if she is believable at that age and to see how she stands up to the ‘competition.’ So, it wasn’t a very researched or informed choice, I just kind of saw it in Walden Books one day when I was picking up something for my mom, and bought it as part of a half off deal.

The story structure is straightforward, especially for this genre, but does not feel worn out or overdone. Basically, Vladimir Tod is half human, half vampire, whose parents died in a house fire when he was younger. Only his best friend, Henry, and his aunt, Nelly, know this. When a new substitute teacher, Mr. Otis, arrives at Vlad’s high school and starts acting strangely towards him, Vlad suspects the newcomer may know his secret. There are several mysteries that unfold throughout the story, such as a certain symbol that keeps appearing everywhere and a curious book Vlad finds that used to belong to his father. Unanswered questions about these and other mysteries are wound carefully into the main story line and keep you intrigued until the end of the book. Also, the answers to the mysterious are satisfying when you finally discover what they are, and all tie in together nicely to create a full picture of Brewer’s vampire world. Mr. Otis was definitely the most interesting character. At times he seems like one of the bad guys, then he spins a tale of woe to Vlad and you think his intentions are good. Later, you wonder if he’s not playing both sides against the middle. The fact that Brewer keeps you guessing about this character’s allegiances until after the climax keeps the reader interested and involved in the story. The interaction between Vlad and Henry feels realistic and looks like what I would image a boyhood friendship to be like, with a little twist, of course.

Overall, it’s a good read, especially for teenage boys who feel like they don’t fit the mold. Vlad dresses in the Gothic style and gets picked on at school. Henry is much more popular than Vlad, but the friendship still works, and these types of friendships are not as uncommon as it seems they would be. Vlad likes a cute girl at school but is too unconfident to talk to her. He has his own private spot where he can go to get away that no one else knows about. Because of these classic angst-y elements, I think this is a book a lot of teenagers can relate to. It’s good storytelling and fun escapism of the vampire persuasion, which is one of the most popular categories in children’s fantasy literature right now.

Visit the author's website: http://www.heatherbrewer.com/
Posted by BC at 6:23 PM