The Amulet of Samarkand

The Bartimaeus Trilogy: The Amulet of Samarkand by Jonathan Stroud

I listened to an audio recording of this book in many stints over several weeks, mostly during long drives in my car.

This book is set in an alternate London, where the upper class is made up solely of Magicians who hold all the ministerial positions in Parliament and run the government. All non-magicians are called commoners. The main way Magicians wield their magical power is by summoning ddjinnis, imps, or other such supernatural creatures, whom they command to do their bidding.

The main plot centers around a 12-year-old Magician’s apprentice named Nathaniel, who summons a powerful djinni named Bartimaeus. Technically this is beyond his ability level, but unbeknownst to his master, who thinks the boy is a fool, Nathaniel is actually very smart and advanced in magic for his age. He commands Bartimaeus to steal the Amulet of Samarkand from the magician Simon Lovelace, who is the villain in this story. The plot centers around Simon and Nathaniel’s feud and possession of the Amulet.

The book is told in two voices, and alternates regularly between the two, sometimes describing the same action from both points of view. The first is Bartimaeus, told in first person. We hear all the djinni’s thoughts and so get to know this character the best. The second is Nathaniel, told in third person.

Thoughts about this style:

I don’t always like this style because it can be harder to keep track of what’s going on. If the two characters are in different places and we switch from one to the other, we must then remember where the first was once we go back to him after not seeing him for several pages. This can get confusing, especially for young readers. This technique does give the reader more information about what is happening, and I think it works best when the two characters are in the same scene, giving us different perspectives on the action. But I found that when I was with Bartimaeus all I wanted to do was get back to Nathaniel. I could not relate to the djinni as well for obvious reasons, and was more interested in following the boy magician’s conflicts. I find it hard to pull away from one character’s point of view once I have already become sympathetic towards him in order to turn to another character. I think this holds true for most readers.

While there is lots of action throughout the story, which in theory is supposed to appeal to kids and make the book exciting, in reality it muddles the plotline. Perhaps not the action itself, but the way it is written. Each part of the action is meticulously described in agonizing detail, and succeeds in doing just the opposite of what action is supposed to do, which is speed up the pacing. Instead, I feel like all the carefully explained action scenes make the story drag. I would rather have a summary of the action or a few key highlights, and then get on with the main thread of the plot. All the big action scenes take me out of the story and loose my interest. The only place where Stoud’s action description really works like it is supposed to is at the climax, where the action is actually a part of the main plotline.

I also found I forgot information that was given early in the book by the time I needed to know it when it came into play later on. Maybe this was due in part to the fact that I listened to the book in many sittings over a few weeks, but I am usually attentive to the story and it’s elements. Some of the things I found myself wondering near the end of the book were: How did Nathaniel find out Simon had the Amulet of Samarkand in the first place? How did Nathaniel finally dismiss Ramuthra (the big bad Simon summons to destroy everyone) to the Other Place (where the supernatural being live when not summoned)? I think I was distracted while listening to this part and didn’t care enough to go back and re-listen.

That said, there were some entertaining elements in this book. Bartimaeus, for one, was a very well crafted character. His sarcastic and unenthused attitude towards the tasks Nathaniel set for him and his deep concern for his fate, which was thickly disguised under a mask of indifference, gave him a definitive personality and voice strikingly different from every other character in the book. But a lot of the time he had quite a snobby, holier-than-thou attitude that often put me off him. You can tell the author clearly put the most time into creating this character. After all, the trilogy is named for him. 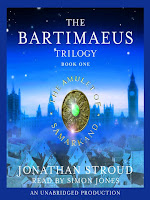 I didn’t always think Nathaniel was believable as a 12-year-old whiz magician the way Artemis Fowl is believable as a 12-year-old criminal mastermind. His whinny complaining occurred just a tad too much for me to think he possessed the maturity level and astuteness of mind to pull off all his stunts. It looked mostly like he got lucky, and had a more powerful and much wiser djinni always getting him out of his jams. The relationship between Nathaniel and Bartimaeus often seemed like an annoying kid brother tagging along with his too-superior-for-his-own-good older brother, rather than a young boy stepping up to the occasion and calling the shots with the aid of a magical djinni at his side. Maybe the author thought the more traditional sort of relationship was too cliché and over-used. But it just made me dislike both of the characters throughout the story.

I feel like the writing or character development did not evoke much emotion from me, and this disconnected me from the story significantly. For example, when two main characters die in a house fire two thirds of the way through the book, I was not very upset, although the author tells me Nathaniel was devastated, and rightfully so. But isn’t the reader supposed to feel what the main character is feeling to a certain extent? Isn’t that the mark of captivating writing? Ironically, the character I cared most about was Ms. Lutyens, Nathaniel’s art tutor. She is a minor character, but I think she had the most to say about what it means to be a person of integrity, and she mentors Nathaniel on using the gifts you are given to benefit mankind, instead of using them for greed. I was upset by her absence when she was taken out of the picture, but she was the only character I found myself really caring about.

I liked that the story was self-contained and all threads wrapped up nicely by the end. The villain got his due, the boy magician triumphs through his own devices, and the djinni is surprised by Nathaniel’s growth by the end of the story. (Although Bartimaeus doesn’t change, he’s still as cocky as ever.) Maybe I am being too hard on the book, it did win a bunch of awards after all, like the 2004 ALA Notable Book award. I just feel overall like it was a whirlwind of a tale that ultimately didn’t have anything meaningful to say. To kids it would be perhaps be pure fun, if they’re into this sort of thing, without revealing anything deeper about a young boy’s coming of age, personal growth through lessons learned, or the nature of ourselves. This book even had the opportunity to talk about what it means to be human, as it refers to the djinnis as slaves a lot. Stoud could have drawn parallels between this magician-djinni dynamic and our own master-slave history, providing a poignant social commentary on this issue. I just feel like he passed by multiple opportunities to say something more, and the shallowness of the story fell flat for me.

Visit the author's website: http://www.jonathanstroud.com/
Posted by BC at 1:52 AM