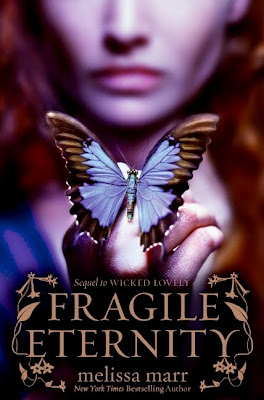 Synopsis from GoodReads:
Seth never expected he would want to settle down with anyone—but that was before Aislinn. She is everything he'd ever dreamed of, and he wants to be with her forever. Forever takes on new meaning, though, when your girlfriend is an immortal faery queen.

Aislinn never expected to rule the very creatures who'd always terrified her—but that was before Keenan. He stole her mortality to make her a monarch, and now she faces challenges and enticements beyond any she'd ever imagined.

In Melissa Marr's third mesmerizing tale of Faerie, Seth and Aislinn struggle to stay true to themselves and each other in a milieu of shadowy rules and shifting allegiances, where old friends become new enemies and one wrong move could plunge the Earth into chaos.

I don't normally review second books in a series because I find it a bit redundant for the purposes of reviewing (not for enjoyment of the book). If I comment on an author's style, pacing, plot devices, etc in the first book, chances are that those elements will be the same in the later installments of the author's series as well. There are exceptions to this, of course, where I enjoyed the series enough that I had different things to say about each book. And ultimately, that's what I wish I could do with every series. But every series doesn't warrant that type of attention, unfortunately. So, for this reason I almost didn't read Fragile Eternity. But although Wicked Lovely wasn't my favorite book, it still intrigued me enough to want to find out more. So kudos to you, Ms. Marr.

Fragile Eternity is actually the third book in the series, but the second book does not follow the protagonists from the first book. Those characters pick up their story again here in this third installment. I read online from other reviewers that it was ok to skip over the second book, Ink Exchange, so I did so, thinking I wouldn't have missed much. Unfortunately, I feel like I missed a whole ton. I think this is because while the main characters in Wicked Lovely are not highlighted in Ink Exchange, they do still appear and contribute to that story. So at the start of Fragile Eternity the characters are referencing left and right the events that occurred in Ink Exchange and the emotional and supernatural consequences of those events. Fragile Eternity is in a large sense the aftermath to Ink Exchange. I felt like I was a late comer to a party where some major drama just happened that I wasn't expecting. As a result, the book was interesting for what it was, but I didn't really care about what the characters were talking about. The whole issue of Aislinn being drawn to Keenan while wanting to stay with Seth consumes this book, but I felt like it crept up very quickly and kind of came from nowhere. In reality, it was probably developed throughout Ink Exchange. I guess the lesson I can learn from this is to stick to my principles of not reading (or watching!) books (or movies/tv) out of order, even if other people say it's ok to skip ahead.

Marr dropped the ball for me with this one. Several different characters had the same conversation and even a few of the same characters had several conversations about the same thing, just discussing it in different ways. It was like beating a dead horse. And what they were talking about - Aislinn's pull towards Keenan but love for Seth and the conflict that created - actually didn't interest me that much and was not as compelling as it could have been. I suppose this may be because I wanted Aislinn to be with Keenan and I didn't really like Seth, so I was not really rooting for the protagonist's cause, and so this makes it hard for me to travel through the book on her journey with her.

In the first book I didn't really had a full understanding of the reason why Seth and Aislinn were into each other, and I certainly didn't get a sense that it was a forever love. However, I let it slide because there was so much other stuff happening in the first book. But Fragile Eternity revolves around the strength of Aislinn's and Seth's love and the fact that Keenan is a deceitful, manipulative faerie who, despite Aislinn's draw towards him, I don't think we are supposed to like. But it was just the opposite for me. Seth seems hum-drum compared to Keenan. Keenan states several times that he will wait forever to be with Aislinn, he will give her whatever space she needs despite his desire for her, he tells her he loves her and she tells him right back "but I don't love you." All the characters just seem to sit around prattling about this issue (as well as a coming war that I didn't see any threat of) and nothing happens. When Seth finally decides to go to Faerie (Fairyland) I thought the action would pick up, but once he's there nothing happens again. The characters talk alot and tell the reader alot but they do not show us much. The old mantra "show, don't tell" would have done some good here. I think this is why I didn't feel the threat of an impending war that Bananach, the war faerie, prattles incessantly about and all the other characters seem to feel.

This book was very much a typical second book, all set-up for future books and no action. Usually, I don't mind that because I am interested in the story and enjoy the character development and further world-building. But this book just fell flat for me after an inventive first book. Maybe it's because I did not read Ink Exchange. Maybe my perception would have been completely different. We'll never know.

Visit the author's website: http://www.melissa-marr.com/
Posted by BC at 6:01 PM