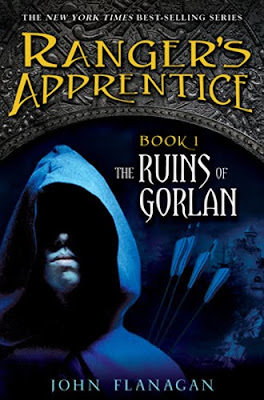 Synopsis from Renaissance Learning: When fifteen-year-old Will is rejected by battleschool, he becomes the reluctant apprentice to the mysterious Ranger Halt and winds up protecting the kingdom from danger.

My decisions as to what I read and review for this blog are often dictated by what is available at my local library. The other day I was itching for something to listen to in the car and didn't have much time, so I pretty much picked up the first thing I saw in the audio book section of the children's library, and it happened to be this. I wasn't super excited about this book, but I had noticed it in prominent view in many bookstores and also remembered seeing it on the New York Times Bestsellers list, so I thought I would give it a try to see if it deserved the hype.

However, Flanagan  sets up a big world with a rich history and lots of back story only to not use much of that information in the first book. For example, we are told about the battle of Hackhem Heath(sp?) and Morgarath and the Wargals and the Kalkara, etc, etc, but the climax had little to do with any of that. All this back story has clearly been set up for later installments of the series, and as a result this book mainly felt like one big history lesson. We learn all this history through Will, the protagonist and apprentice ranger, asking questions of his master, Halt. But as a reader, I don't want a history lesson, and I don't want to read a conversation between Master and Apprentice that has clearly been contrived just to give me this history lesson. I want to find out this history naturally through the events in the book. The back story needs to be woven into the current action, and it wasn't. Another indication that this first book is merely an establishing book for the rest of the series is the fact that the sections on Horace at battle school do not contribute much, if anything, to the central storyline, which I considered to be Will's story. I assume in later books Horace will have a larger and more central part to play. And another thing, the whole plot of two boys hating each other, then coming together to be loyal friend through some shared life-threatening experience is very tired and predictable.

One of the things that annoyed me most about this book was the all the head-hoping! Oh my gosh I have never seen it this bad! It's bad enough when authors switch perspectives in chunks (I really don't like that approach unless if is done very well), but Flanagan changes point-of-view line by line at times. He will do it randomly as well, following one character's thoughts for a large section with a line or two of a different character's thoughts thrown in. Besides being disorienting and hard to follow (sometimes you are not sure who's thoughts you are being told about) it takes away from the protagonist and totally obliterates the emotional investment the reader has in him. This is because if we are told about Will's apprehension or uncertainty in the presence of authorities like the Battle Master or the Baron, and in the next line we are told what the Battle Master is thinking about Will, it disrupts the reader's ability to relate to Will and what he is experiencing.

Also, I don't like it when characters seem older or younger than the age they are supposed to be. In this case, the protagonist, Will, is supposed to be 15. And yet, these books are middle grade books for kids who are 10-12 or so. Likewise, Will seemed to be around 12, not 15. A huge difference. And if the author had said he was supposed to be 12, the whole book would have been fine like that.

I think if I had written this book, I would have axed the prologue. It's unneeded to tell the story and doesn't hook me right off. In fact, it's boring, and when it was the first thing I heard on the audio book, I was afraid the whole book was going to be a snoozer. Fortunately, I perked up right away when Chapter One started, and that's a clear indication to me that the prologue was unnecessary.

For all the criticism I am giving, I still enjoyed the book to some extent. It's a shame it wasn't more than it was, because it certainly had the potential. It is a good book on it's own, but when middle grade books the likes of Harry Potter and Percy Jackson exist, where healthy doses of action, back story, and emotion exist in an appetizing balance, Ranger's Apprentice just can't compete.

Find it on Amazon: The Ruins of Gorlan (The Ranger's Apprentice, Book 1)

Visit the author's website: www.rangersapprentice.com
Posted by BC at 3:47 PM