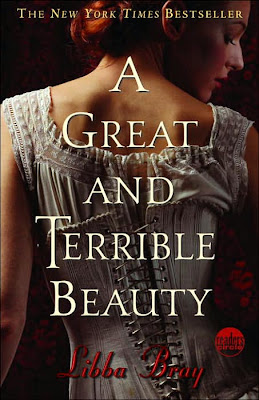 A Great and Terrible Beauty by Libba Bray

Synopsis from GoodReads: A Victorian boarding school story, a Gothic mansion mystery, a gossipy romp about a clique of girlfriends, and a dark other-worldly fantasy--jumble them all together and you have this complicated and unusual first novel.

Gemma, 16, has had an unconventional upbringing in India, until the day she foresees her mother's death in a black, swirling vision that turns out to be true. Sent back to England, she is enrolled at Spence, a girls' academy with a mysterious burned-out East Wing. There Gemma is snubbed by powerful Felicity, beautiful Pippa, and even her own dumpy roommate Ann, until she blackmails herself and Ann into the treacherous clique. Gemma is distressed to find that she has been followed from India by Kartik, a beautiful young man who warns her to fight off the visions. Nevertheless, they continue, and one night she is led by a child-spirit to find a diary that reveals the secrets of a mystical Order. The clique soon finds a way to accompany Gemma to the other-world realms of her visions "for a bit of fun" and to taste the power they will never have as Victorian wives, but they discover that the delights of the realms are overwhelmed by a menace they cannot control. Gemma is left with the knowledge that her role as the link between worlds leaves her with a mission to seek out the "others" and rebuild the Order. A Great and Terrible Beauty is an impressive first book in what should prove to be a fascinating trilogy. (Ages 12 up) -Patty Campbell

Anyone who loves to get lost in Gothic Victorian fantasy will love this book. Maybe it’s just the style, but I didn't like the indeterminate nature of the magical properties set forth. They were unclear and didn't give the reader a full idea of what Gemma could actually do. For example, the fact that Gemma and her friends' physical bodies enter the 'Realms' and not just their spirits (as a reader might assume from the mystic nature of the cross over) is not made clear until a defining moment at the end of the book that I will not give away here. The fact that the nature of the 'Realms' and its magic properties are not clearly explained does not seem intentional, because the girls seem to understand its parameters perfectly well. As the reader I feel like I missed something, or like the chapter where it’s explained was mistakenly left out.

For example, in the quote below we are told for the first time that the girls are invisible when they enter the Realms - disc 9 - which is pretty late in the game.

"We take that ride on the mountain top... I'm a mermaid rising from the sparkling sea. But when I look down the water is my mother's face, tight and fearful. I'm suddenly afraid and wish I could stop. But in the next moment we're swept away to Felicity's tent. Our eyes shining, our skin rosy, our all-knowing smiles are back. Our bodies feel like luxurious sighs as we stand in the Great Hall - completely invisible. Oh God, the great and terrible beauty of it." (disc 9 track 1)

They have been going to the Realms for the majority of the book. In this abstract they are in the Realms, but they are also in the Great Hall of Spence School. All other Realm visits have been to a lake and surrounding woods that seem to be in another plain of existence; like a sort of fairyland. So are the Realms another dimension that overlaps with ours? The scene above would lead you to believe so. Or are they still in this plain, just made invisible by Gemma's magic? No such distinction is ever made.

There are some bursts of action through the book, but overall the story seems mundane to the point of dragging. The majority of the book describes the everyday life of an early nineteenth century girls’ boarding school. When central action does occur, it’s very contained. It does not generally lead to another action or plot point which in turn moves the story along. It happens, and then it’s over and we're back to daily life. I suppose if you like The Little Princes you would like this book. First because of the time period but second because it is mainly a period piece lightly seasoned with fantasy elements, not the other way around, which, I can't help thinking the author had intended. There was much more opportunity to delve into the sinister and intriguing world that was Victorian mysticism. I think that type of stuff is fascinating. For example, when the school took a field trip to a psychic or when the girls took it upon themselves to visit the gypsy Mother Theresa - those were juicy moments that could have been expanded. Even the girls' art teacher, Miss Moore, telling them about the carving on the cave wall, could have been used more efficiently and to more effect.


Libba Bray’s writing in lyrical and dream-like. It’s easy to get caught up in the rhythm of her words:
"Forgiveness. The frail beauty of the word takes root in me as I make my way back through the woods...but forgiveness, I'll hold onto that fragile slice of hope and keep it close, remembering that in each of us lies good and bad, light and dark, art and pain, choice and regret, cruelty and sacrifice. We're each of us our own...bit of illusion, fighting to immerge into something solid, something real. We've got to forgive ourselves that. I must remember to forgive myself, because there's an awful lot of gray to work with. No one can live in the light all of the time." (disc 10, last track)
I really enjoy this quote, not only because it is beautiful and sums up the struggles that occur in the book, but also because the last sentence is something Gemma’s mother said to her when they were first reunited in the Realms after Gemma's mother’s death. Here at the very end of the book Gemma can reflect on and fully realize what her mother was telling her because of the journey she has taken and then way she had grown throughout the story.

One interesting note about the audio-book is the author's writing journal after the end of the book. Maybe it is in the printed book too, I don't know, but it was nice to hear here because this part is done in the author's own voice. She talks about her editor, struggles with formulating an outline, different contacts she spoke with for information, books she read as part of her research into Victorian-era boarding schools, and things like that. It is nice to hear her writer's process, and is especially enlightening for me as I can compare my own process to hers. I've read plenty of interviews and authors' web pages where they talk about the writing process, but I have never come across one who actually displays it almost as a piece of writing in itself like this author does, and I think it is a very clever idea.

Find it on Amazon: A Great and Terrible Beauty (The Gemma Doyle Trilogy)