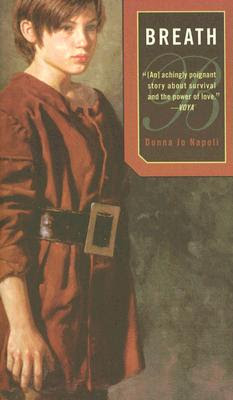 Breath by Donna Jo Napoli
Published: 2003 by Simon Pulse
Word Count: 47, 453
Source: Paperback
My Grade: A+
Synopsis from GoodReads: Salz is a boy afflicted with cystic fibrosis -- though in the Middle Ages in Saxony no one can identify it as such. Instead he is an outcast, living with his unfeeling father and superstitious brothers in a hovel outside Hameln. His grandmother has kept Salz alive by having him avoid the mead and beer commonly drunk by all and by teaching him how to clear his lungs.
When the townsfolk of Hameln are affected by a mold that grows on the hops -- poisoning their mead and beer -- Salz is one of the few who are unaffected. The mold's effect is hallucinogenic, and soon Hameln is in the grips of a plague of madness, followed by a plague of rats. It is only Salz who can proclaim the truth -- although it might cost him his life.


Donna Jo Napoli has a talent for saying a lot in a small space. Her book is thin but the story is rich in character, setting, and action. There is texture and culture that brings the story to life, yet it is subtle enough that it does not overwhelm the simplistic style of the folktale. The book has a wide and advanced vocabulary, which may be frustrating for younger readers.
Napoli writes young adult novels based on classic fairy tales. This one is based on The Pied Piper of Hameln. I love her novels because she brings a sense of reality to the traditional stories. What these people were really feeling, thinking, experiencing. She places them in a concrete period of history and pulls the true human condition through the kiddy fluff that mainstream culture has often made these tales. These tales are passionate, heart-wrenching, wicked, cruel, gut-wrenching, and compelling all at once. Napoli shows us fairy tales’ truest potential and shines a light on why these stories exist in the first place.
I recently read on the author’s website that Breath is her favorite book she has written. I was pleasantly surprised by this information, thinking it serendipitous that I should come across it as I was reading Breath and not before, although I have read a number of her other fairy tale novelizations. She doesn’t offer a reason as to why this book is her favorite, and while it’s a great book, I wonder why, because I have found her other books to be just as good. Maybe it is the fairy tale she likes over the others she has written about. It can be hard to pin point why we prefer one fairy tale over another, can’t it? Like in my case, I love The Little Mermaid. Her novelization of this fairy tale is called Serena and I love it to bits. But why do I love it so much more than Beauty and the Beast, or Rapunzel, or Cinderella? It’s hard to say. But this is besides the point. 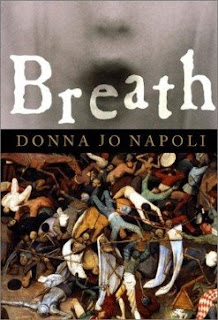 Still, this book is for people who appreciate stories at their barest essence. For people who appreciate a tale, a ‘story’ in the truest sense of the word. No gimmicks, no flashy action, no intrigue or convoluted plots. No protagonists who can kick butt while spewing snappy one-liners. No, this is a simple story. A story that shows us what storytelling used to be like. A story that shows us a simple tale can still captivate us. After reading some very flashy “hot” fantasy fiction that is popular now – which I enjoyed immensely, don’t get me wrong – this book acted almost as a detox. It brought be back to the books I read a lot as a kid.
Before I end this review I would like to talk about enchantment. Fairies enchant. It’s a simple fact. So I find myself relating this experience often in my writing (since I write about fairies). And yet, there are only so many times you can use the word ‘enchant.’ I am always looking for new ways to describe this experience of being enchanted or entranced, if you will. So I would like to point out the way Napoli does it in this story (although she does use the nefarious verb):
“The piper stands on the platform and looks out across the pandemonium, judging the situation. Then he takes out his pipe and plays. In an instant everyone goes silent. It’s as though we’ve heard the loudest thunderclap and seen the entire heaves fill with lightning. We are enchanted. And we’re moving. The music draws us all. We can’t stop ourselves.” (p. 242).
I also like how this instance of enchantment is brought on by music, as is often the case where fairies are concerned as well.
Find it on Amazon: Breath