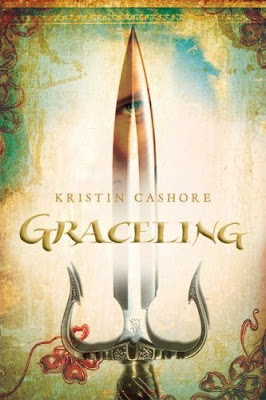 Graceling by Kristin Cashore
Published: October 1st 2008 by Harcourt Children's Books
Word Count: 115,109
Series: The Seven Kingdoms Trilogy, book one
Source: audio book
My Grade: A-
Synopsis from GoodReads: Katsa has been able to kill a man with her bare hands since she was eight — she’s a Graceling, one of the rare people in her land born with an extreme, and in her case horrifying, skill. As niece of the king, she should be able to live a life of privilege, but Graced as she is with killing, she is forced to work as the king’s thug. When she first meets Prince Po, Graced with combat skills, Katsa has no hint of how her life is about to change. She never expects to become Po’s friend. She never expects to learn a new truth about her own Grace — or about a terrible secret that lies hidden far away... a secret that could destroy all seven kingdoms with words alone.
I am a huge nerdy geeky fan of high fantasy. Medieval dress, horseback riding, archery, castles, keeps, royal family politics, completely fictional kingdoms, the works. (I am not such a fan of some of the more eccentric, social-skills-lacking personalities of my fellow fans, but that is an issue for another day). But with Graceling, I was skeptical. Urban fantasy, paranormal fantasy, and supernatural romance fantasy are the popular trends right now, and I would think a Young Adult high fantasy novel would seem cheesy and out-of-touch compared to these. As it is, there are not too many young adult high fantasy novels that have really hit main-stream popularity in recent years. And then I read the jacket copy - this book is about a girl who has a supernatural ability to kill anyone and is used as an assassin by her uncle the king - and I was even more skeptical. Killing? A Lady Assassin? Grimace. But the title is interesting. Graceling. Almost like 'changeling,' and according the same connotations that word invokes. It intrigued me, which tells me it does it's job of instantly catching the reader's attention.

After a solid world-building and establishment of the main characters,  the story drags a bit and doesn't appear to be going anywhere. Even when the two main characters set out on their quest though, I'm unsure of where this story is heading or even what their end goal is. Writers are told to set their stakes early so the reader knows the writer knows what she's doing. Readers don't like to be led blindly into the thick of the book without being assured of some payoff at the end. Unfortunately, it did feel a little like this for a while. Also, the author seems to deal with one issue at a time, then move on to the next and almost forget about the previous issue. However, that is not how real relationships work and at these points the story line felt a little too structures to look natural. This may sound contradictory but in fact the two criticisms compliment each other. For example, if the time spent developing Katsa's and Po's relationship was intermingled a bit more with the time the characters spent discussing their enemy and their plan for their quest, I think it would have made the pacing and the story line feel more natural and reassured the reader of the novel's intentions simultaneously.

Perhaps this is the reason:

"Characters, relationships, and feelings come first. Then setting, plot, and so on tend to filter in around it. The details of the plot, the bones that hold it together, are often the last things I work out; there are parts of the plot I don't know until I get to them in the book, and they happen." (from the author's website, where she explains her writing process)

But this issue was not so bad that it interrupted my enjoyment of the book. Actually, I was pleasantly surprised with the book in general, and found myself liking it more than I thought I would. This, however, is coming from me, a high fantasy fan. I still don't think it will reach as wide an audience as other types of popular young adult fantasy fiction will, but if you like castles and royal intrigue and sword fighting and the classic tromping-through-the woods-for-days-on-end quest, then you will most likely enjoy this book too.

"A writer is an extremely human thing to be. " ~Kristen Cashore (from her website)

Find it on Amazon: Graceling

Visit the author's website: http://kristincashore.blogspot.com/
Posted by BC at 9:00 AM