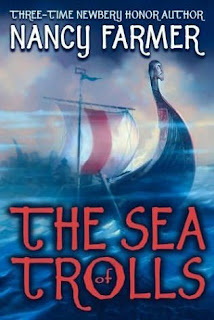 The Sea of Trolls by Nancy Farmer

Synopsis from GoddReads: After Jack becomes apprenticed to a Druid bard, he and his little sister Lucy are captured by Viking Berserkers and taken to the home of King Ivar the Boneless and his half-troll queen, leading Jack to undertake a vital quest to Jotunheim, home of the trolls.

This book could have been two-thirds or even half its length and still be satisfying. There are lots of good bits in this book that keep my attention: when Jack becomes an apprentice to the Bard, when the Northmen raid and sack Jack's village, when Jack and his little sister Lucy are captured and turned into slaves, when the Northmen Queen threatens to sacrifice Lucy to the goddess Freya unless Jack fulfills a quest. These and others are all great plots points, and they are even surrounded by little character aspects and descriptions that serve to create an idea of the world in which the book is set. However, surrounding these elements are lengths of doldrums that I could have skipped over. Like when Jack and the Bard are preparing for the Northmen's attack - it goes on for too long. They only thing that happens for a while is the waiting. Also when Jack is on his quest with Olaf and Thorgil - there is a bit much of nothing happening with lots of description. I found myself tuning out. Things like this slow down the pace and lose reader interest. I don't think I would have kept reading if I was reading the normal way instead of listening to the audio book.

That said, there are many quality aspects to this book. First of all, the subject matter. When's the last time there was a young adult fantasy novel about Vikings and Norse mythology? And there is a lot of Norse mythology in here, which I love. The Vikings themselves are never mentioned by that name - they are only called Northmen - but that is fine, as I think 'Viking' was a late term. I'd have to look that up. Second, I appreciate the author's writing style. She consistently writes in a folktale-like style that I would think could only come from years of experience with folktales. This is subtle but undoubtedly present, and I think it serves the body of the work well, like we are in the middle of an ancient Norse epic or saga. Also, the blend of history, mythology and fiction here is seamless and very well done.

Most books I've read for this blog I've either liked very much or very much disliked. With this one I am strongly middle-of-the-road. I think it's because I can't decide whether to condemn it for its constant rambling or praise it for its seemingly effortless portrayal of Viking life. I suppose I've already done both, so I'd say in this book the pros equal the cons. The story is not complicated but a simple quest, after all. You can't go wrong in a fantasy or historical fiction piece with the classic quest, right? Well, as long as you keep the reader interested. I read one critic review that calls Jack's quest Tolkien-like. I don't know if I'd go that far, but I can see the similarity.
On a side note: only after finishing this book did I realize this is the same author who wrote The Ear, the Eye and the Arm, one of my favorite books when I was a budding young reader!
Get it on Amazon: The Sea of Trolls

Visit the author's website: http://www.nancyfarmerwebsite.com/
Posted by BC at 5:00 PM