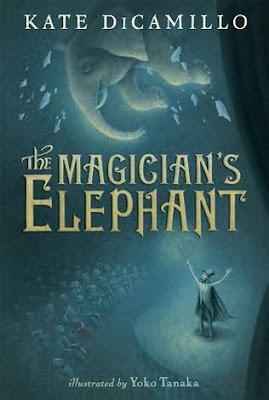 Synopsis from GoodReads: What if? Why not? Could it be?

When a fortuneteller's tent appears in the market square of the city of Baltese, orphan Peter Augustus Duchene knows the questions that he needs to ask: Does his sister still live? And if so, how can he find her? The fortuneteller's mysterious answer (an elephant! An elephant will lead him there!) sets off a chain of events so remarkable, so impossible, that you will hardly dare to believe it’s true. With atmospheric illustrations by fine artist Yoko Tanaka, here is a dreamlike and captivating tale that could only be narrated by Newbery Medalist Kate DiCamillo. In this timeless fable, she evokes the largest of themes — hope and belonging, desire and compassion — with the lightness of a magician’s touch.

This book’s poetic timbre and style remind me of an old tragic folk ballad. Its ultimate message is an uplifting one and all ends well, but the reader arrives here by first treading through somber themes. The world is broken, truth cannot be trusted, despairing in the unlucky fate of one’s circumstances – these are all ideas that pervade much of the story.

Some of the narrative seems a bit drastic, or at least over-dramatic, for a children’s book. Such as how the elephant becomes depressed after she is summoned to the town of Baltese by the magician:

“The world has become too cold and confusing and chaotic to bear, she [the elephant] stopped reminding herself of her name. She decided that she would like to die.’ (p 119)
Again this inclination, treated as simple truth, appears when Peter, the protagonist, visits the elephant for the first time:

“And Peter forgot about [his sister] Adele and his mother and the fortuneteller and the old soldier and his father and battlefields and lies and promises and predictions. He forgot about everything except for the terrible truth of what he saw, what he understood in the elephant’s eyes. She was heartbroken…The elephant must go home or she would surely die.” (p 129)
The theme of deliverance is strong. The trudging inhabitants of this sleepy solemn town know not what to put their faith in, so when the extraordinary happens, they cling to that, even though they know it is not truth:

“And everyone, each person, had hopes and dreams, wishes for revenge, and desires for love. They stood together. They waited. And secretly, deep within their hearts, even though they knew it could not truly be so, they each expected that the mere sight of the elephant would somehow deliver them, would make their wishes and hopes and desires come true.” (pps 113–114)
Ideas of truth are also strong. The thought that truth might be subjective or that it is hard to gasp is set up in the first few pages of the book, when Peter asks the fortuneteller if his sister is alive, and she tells him something contrary to what his guardian, Lutz, has always told him. He walks home chanting to himself “he lies, she lies, he lies, she lies.” (p 3) and doesn’t know which to believe. This sentiment is repeated later in the book: “The truth is always changing.” (p 109) But while Peter may see the truth as something that is hard to pin down, he at least sees the world as full of possibilities. This is at odds with Gloria’s view of the world:

“‘How will the world change if we do not question it?’[asked the police officer] ‘The world cannot be changed.’ said [his wife] Gloria. ‘The world is what the world is and has forever been.’” (p 145)
But this is a self-defeating attitude. For the ones who seek to change, who challenge how things are, are the one who are remembered as innovators and great contributors to humanity.

"The world is broken, thought Peter, and it cannot be fixed." (p 150) All these themes combine to create a very dour mood to the book. But we are saved by the happy ending. The elephant goes home, the magician gets out of prison (he was put there for producing the elephant, which then landed on a woman and injured her), Peter and Adele are reunited, Peter no longer has to live with the insane militaristic Lutz, and Adele no longer has to live in the orphanage.

I’m giving this book a ‘B’ in my review because, though it has literary merit, it isn’t the most captivating book. It would be good for schools because there is a lot of subtext and meaning in the themes. I only scratched the surface in this review. The author calls it a story about love and magic, and it is that, but essentially it is a fable about believing in the impossible.

Find it on Amazon: The Magician's Elephant