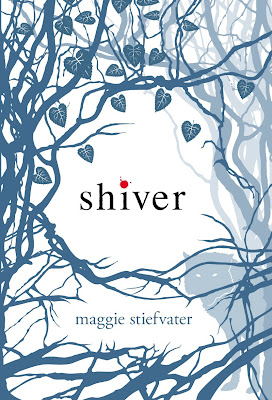 Synopsis from GoodReads: For years, Grace has watched the wolves in the woods behind her house. One yellow-eyed wolf—her wolf—is a chilling presence she can't seem to live without. Meanwhile, Sam has lived two lives: In winter, the frozen woods, the protection of the pack, and the silent company of a fearless girl. In summer, a few precious months of being human ... until the cold makes him shift back again.

Now, Grace meets a yellow-eyed boy whose familiarity takes her breath away. It's her wolf. It has to be. But as winter nears, Sam must fight to stay human--or risk losing himself, and Grace, forever.

Reinvention is the rage. I guess it always has been, if you think about it. But especially now, in young adult fantasy fiction. This time it’s werewolves. It's amazing how ten short years ago; writing a love story about a werewolf would have seemed trite and corny. Now, teenagers can't get enough of them. In Maggie Steifvater’s Shiver, werewolves are paired effectively with a theme that’s been reinvented a million times over: star-crossed love. You'd think we'd get tired of it, but we don't. Myself included.


The present story twists the werewolf myth in a different direction from what we've seen before. No changing at will (like in Twilight), no changing with the full moon (like in Buffy or a number of other werewolf stories). Stiefvater's werewolves change with the climate. Freezing temperatures make them change into wolves; summertime brings humanity – but only for so many years. The werewolves change back into humans later and later in the summer as the years pass, and eventually they stop changing and remain a wolf. This is a problem for eighteen-year-old Sam, a werewolf who is in love with a human girl named Grace, because he thinks this is his last year as a human. Perhaps without meaning to, Stiefvater touches on essential elements of the human condition with this aspect of her story. Are we still ourselves in another form? If we 'change' in some way, do we lose a part or all of ourselves? And of course – what makes us human? Once Sam stops changing and remains a wolf for the rest of his life, is he still Sam? Is he still that sensitive guy who likes to mull over song lyrics in his head? Can he still be in love with Grace? Can a wolf even love? Or is it all instinct and survival?

Maggie Stiefvater's style is subtly formal, almost like poetry. At the same time it is easily readable and the subject matter is accessible to young readers. Her style allows for beautiful imagery crafted from straight-forward words that results in some of the best description I've read in young adult novels. It can be as simple as something like:

"I crunched out across the brittle, colorless grass...momentarily dazzled by the violent pink of the sunset through the fluttering black leaves of the trees."  (p 18-19)

And yet it is vivid and memorable in the reader's mind. The author's use of the words 'violent pink' and 'black leaves' give us an instant picture of what Grace sees when she steps into her backyard. I find myself impressed by Stiefvater's descriptions over and over again. Not only are they striking and beautiful, they serve to add depth to the characters and the action, and therefore turn a good story into a compelling one. They compliment the story rather than act as filler.

However, while Stiefvater's descriptions are top notch, I cannot always say the same for her dialogue. It sometimes feels corny or fake, especially in group scenes. The supporting characters sometimes sound younger than high schoolers and some of Sam's lines don't sound exactly believable because they have the over-analysis of a girl's mind behind them. Walking the line between fulfilling our fantasy of what we wish a guy would say and what just sounds too unrealistic is a delicate dance. Being a woman myself, I find it harder to create convincing male voices on the page than female ones, and I doubt it comes easy to any woman writer. That isn't to say there are some who don't do a great job, but while this author's female sensitivities serve her well for her full embodied descriptions, they do her a disservice when crafting her male characters. But it's not enough of an annoyance to put me off the book entirely. Half of me wants to give into this fantasy of a sensitive guy and a stoic girl, and the other half of me wants to chide it for being completely opposite of reality.
I purchased and read this book because I absolutely loved Stiefvater’s debut novel, Lament: The Faerie Queen’s Deception. Despite my nit-picking, this author provides consistent high-quality storytelling and I cannot wait to read Linger, the sequel to Shiver.
Find it on Amazon: Shiver

Visit the author's website: http://www.maggiestiefvater.com/
Posted by BC at 7:33 PM