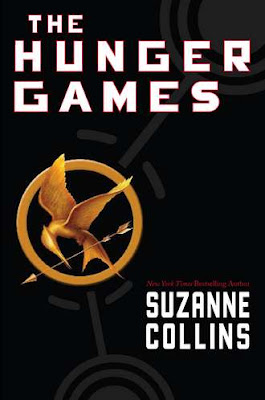 The Hunger Games by Suzanne Collins
Published: October 1st 2008 by Scholastic Press
Word Count: 99,750
Source: Hardcover library book
My Grade: A
Synopsis from GoodReads: In the ruins of a place once known as North America lies the nation of Panem, a shining Capitol surrounded by twelve outlying districts. The Capitol is harsh and cruel and keeps the districts in line by forcing them all to send one boy and one girl between the ages of twelve and eighteen to participate in the annual Hunger Games, a fight to the death on live TV.

Sixteen-year-old Katniss Everdeen, who lives alone with her mother and younger sister, regards it as a death sentence when she steps forward to take her sister's place in the Games. But Katniss has been close to dead before—and survival, for her, is second nature. Without really meaning to, she becomes a contender. But if she is to win, she will have to start making choices that will weigh survival against humanity and life against love.
The Hunger Games is a jarring reminder of the true extent of human brutality. In a modern age where we think of ourselves as more civilized and humane than our ancestors – who used kill tactics that maximized human pain and humiliation – it is easy to think that we are not essentially of the same nature as those who lived in earlier times. In this book the author suggests that if certain factors that sustain our way of life were eliminated and the situation became extreme, we could easily revert back to a primitive scale of punishment and justice.
Problems:
There needs to be a reason for why our world has fallen into a dystopian existence. If the setting is supposed to be a completely different world, fine, but this story clearly sets up its history as a society split into twelve districts that used to once be the United States. The capitol of this new nation, called Panem, resides in the middle of the Rocky Mountains, and the district from which our protagonist hails, District 12, “was once a place called Appalachia.” The author briefly hints that the reason for the destruction of society as we know it today occurred mainly because of natural disasters and the chaos that inevitably follows (p 18). But she provides no back-story as to how the Panem configuration came about.
Fantasy and Science Fiction is supposed to be escapism. When I dive into this type if book I expect a combination of excitement, adventure, mystery, magic, and discovery.  Do I really want to read about starving children and squalid communities who exist on an illicit diet of squirrel and pig guts? Not really. It’s unpleasant and makes me think there are probably places similar to the one described in this book in reality somewhere. I don’t know if the author had to make the protagonist’s environment quite so deprecating in order to get her point across.
Things I liked:
I think the mockingjay is a clever invention. The image of the mockingjay pin on the book’s front cover is a striking and memorable image.
When Katniss and Peeta arrive at the Capitol for the Games they are met with an unexpected surge of glitz and glamour. But it is only unexpected on the part of the reader. Katniss knows in part what to expect from watching previous Games on TV. However, as the uninitiated, I found the celebrity, high-profile, glossy, showy pomp and circumstance to be quite irksome considering the true reason for the hullabaloo. You would think the ‘representatives’ from each of the 12 districts had gathered for the Olympic Games rather than what is essentially a death sentence for all but one of the twenty-four tributes who are participating. The idea of such brutality going hand-in-hand with frivolity is something very foreign to our modern sensibilities, where brutality and killing is seen as savage, low, and despicable. We see the Roman gladiators of the past as misguided attempts for glory and honor and yet, in this dystopian world, are the Hunger Games not another type of gladiatorial arena where the strongest survives? I think this ancient and tabooed way of thinking placed in a futuristic society greatly contributes to the appeal of this book. It is a universal quest – the effort to understand who we were and applying that knowledge to who we will become.
In that sense, I think this story can serve as a sort of warning. What if we forget who we were? Do we then also forget our humanity and remain in a savage state, never learning from our mistakes and transcending to a higher level of existence? Perhaps this is the idealistic historian in me, but I would like to think that this is how human nature works.
The Hunger Games is the most imaginative type of speculative fiction and a type of dystopian vision that doesn’t seem likely to come about. It feels indulgent at times, using our current reality to form what is essentially a completely fictional setting. The extent of Katniss’s and her district’s hardship - eating raw fish and game, hunting daily for survival, living in filth and squalor surrounded by emaciated people – rankles satisfyingly next to the high-tech and fanciful miracle medications that heal a third degree burn in just a week, or can erase all a person’s scars after two days.
I’m surprised this book is so popular given its graphic material and descriptions. Because of these it was not exactly my cup of tea, but I did enjoy reading it and cannot deny it is a compelling story.
Get it on Amazon: The Hunger Games

Visit the author's website: http://www.suzannecollinsbooks.com/
Posted by BC at 9:00 AM