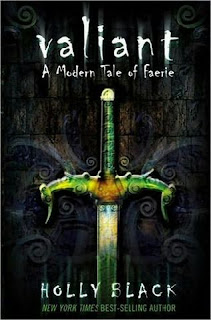 My Grade: B-
Synopsis from GoodReads: When seventeen-year-old Valerie runs away to New York City, she's trying to escape a life that has utterly betrayed her. Sporting a new identity, she takes up with a gang of squatters who live in the city's labyrinthine subway system.
But there's something eerily beguiling about Val's new friends. And when one talks Val into tracking down the lair of a mysterious creature with whom they are all involved, Val finds herself torn between her newfound affection for an honorable monster and her fear of what her new friends are becoming.
Note: This is technically the second book in Black’s series, but can be read as a stand-alone since none of the main characters in the first book, Tithe, appear in Valiant.
This is an urban fantasy about faeries and the unfortunate human teenagers who get caught up in faerie plots.
Valiant didn’t grab me the way it might have been supposed to because I couldn’t connect with the protagonist, Val. Maybe I was a little too straight-laced in high school, but a book about a teenage runaway who shoots up faerie heroine to get high and lives in a smelly rodent-infested abandoned NYC subway station for most of the book just didn’t pique my interest the way another premise might. I can see how it might be appealing to some teenagers, as I know the desire to go out on one’s own and ‘live on the streets’ may seem thrilling or glamorous or just plain adventurous.  I do like how the protagonist’s name casual shifts from Valerie to ‘Prince Valiant’ with her change in environment, signaling to the reader that she is assuming a new identity while keeping the same nickname: Val.
The human character I found most interesting was Luis, and the scene I found most interesting was when Luis told Val about his childhood and his history with the fairies. As you might know if you’ve read my other reviews, I’m a sucker for back-story. That’s the element that pulls me into a book the most.
The love story between Val and Ravus the troll was at first unexpected and then oddly refreshing, as you do not normally find love stories between mortals and what we collectively consider monsters or ugly creatures – trolls being in this category.
The actress who reads the audio book Valiant gives Ravus a very gruff voice. Because of this I didn’t necessarily suspect where his relationship with Val was going.  I think if I had read the book the more conventional way, I would have depicted him in my head as more of a ‘gentle giant’ type, although perhaps hidden behind a wary and rough exterior.
When it was revealed toward the end of the book that the faerie Mabry was a prominent figure in the main mystery the mortal teenagers were trying to figure out, I was a little uninterested because we only see Mabry once before her role in the central storyline is revealed. Because of this, we don’t get to know her very well and thus are disinterested in how she matters to the central action.
Overall, not my cup of tea, but I can see why it’s popular.
Get it on Amazon: Valiant: A Modern Tale of Faerie

Visit the author's website: http://www.blackholly.com/
Posted by BC at 9:00 AM