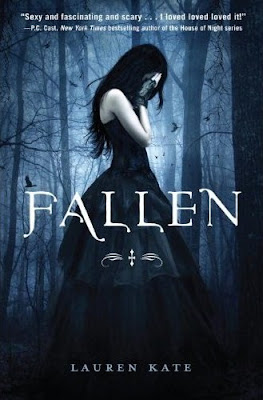 Synopsis from GoodReads.com: There’s something achingly familiar about Daniel Grigori.

Mysterious and aloof, he captures Luce Price’s attention from the moment she sees him on her first day at the Sword & Cross boarding school in sultry Savannah, Georgia. He’s the one bright spot in a place where cell phones are forbidden, the other students are all screw-ups, and security cameras watch every move.

Even though Daniel wants nothing to do with Luce–and goes out of his way to make that very clear–she can’t let it go. Drawn to him like a moth to a flame, she has to find out what Daniel is so desperate to keep secret . . . even if it kills her.

This synopsis looks so tediously over-used that at first I passed this book by. I thought it would be all mushy girl-who-can't-help-herself-because-she's-so-in-love-with-Adonis-incarnate (which it is, but I've built up a tolerance for this prevalent premise I suppose).  I just want to know who wrote this synopsis. Drawn to him like a moth to a flame? Come on, even I find that corny, and I like corny. But actually, the book is much more interesting than its synopsis leads us to believe. Christian mythology is a popular topic in the supernatural/paranormal fantasy genre right now, and more specifically, fallen angles. This is only the second book about fallen angles I have read (after Hush, Hush) and it is already feeling old. So I like that this book takes place at a reform school. That was something I didn't expect and I was more interested to find about about Luce's life there because of the unique setting.

I loved the quirky characters, both students and teachers. They all gave a distinct flavor to the tone of the book and I only wished I could have gotten to know more about each of them.

(Most of the rest of what I have to say is criticism, but be assured that I still enjoyed the book greatly!)

Let's talk about the prologue. It was undoubtedly captivating and definitely supplied that 'hook' you need to get your readers instantly into your book, but it also gave a ton away. Because I had read the prologue, I kept waiting for the idea it proposed to come to fruition in the main body of the novel. I already knew most of what was going on, was able to guess the rest, and fully understood why Luce had strange you-seem-familiar feelings or half-hidden memories she couldn't quite explain. This took me out of the experience a bit, more like watching another person go through something rather than going through it with her, which essentially is why we read books right? So we can vicariously experience what the characters are experiencing? So the prologue ruined that a bit, even though I liked it very much.

Another problem I had with the book is that the prologue sets up an expectation what was not fulfilled by the end. In fact, I felt cheated out of a discovery, having read through the whole book only to discover the situation proposed in the prologue would not be fully explained by the end. I think that's a cop out and a cheap way to prolong the story so it stretches into sequels. The 'revelation' or the thing we get to discover near the end of the book is only the fact that Daniel is a fallen angel, which any reader with a brain will have already known. So no, this is not a satisfactory explanation of the unanswered questions Luce and us readers have. Daniel gives a reason for why he can't explain everything to Luce, but I still don't buy it. Sorry!

The biggest story element that absolutely needed to be explained and wasn't was the deal with the fires. Did Luce somehow start the fires, both times resulting in a boy's death - or did the 'shadows'? Why fire? Is there a special significance to fire? Like, Hellfire, maybe?

I also disliked Penn's death. Not in the sense that I liked the character (which I did, she was my favorite) and was sad to see her go, but in the sense that it didn't feel like she needed to die and was just included for dramatic effect, which didn't quite produce the result it was supposed to.

This sounds so critical but actually I enjoyed reading the book and may even read the second one, if only to find out why Luce and Daniel are star-crossed, which is not explained in this book! Blast!

Find it on Amazon: Fallen