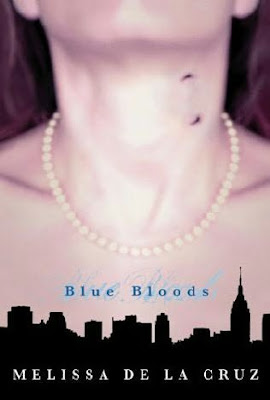 Synopsis from GoodReads: When the Mayflower set sail in 1620, it carried on board the men and women who would shape America: Miles Standish; John Alden; Constance Hopkins. But some among the Pilgrims were not pure of heart...Indeed, they were not even human...Rising to levels of enormous power, wealth, and influence, they were the celebrated blue bloods of American society.

Schuyler Van Alen is a sophomore at a prestigious private school [in New York City]. She prefers baggy, vintage clothes instead of the Prada and pearls worn by her classmates, and she lives with her reclusive grandmother in a dilapated mansion. Schuyler is a loner...and happy that way. Suddenly, when she turns fifteen, there is a visible mosaic of blue veins on her arm. She starts to crave raw food and she is having flashbacks to ancient times. Then a popular girl from her school is found dead... drained of all her blood. Schuyler doesn't know what to think, but she wants to find out the secrets the Blue Bloods are keeping. But is she herself in danger?
Welcome to my first ever vampire book review!

The author does a lovely job at the subtly with which she approaches the revelation of who these people really are. (Unfortunately the cover art practically gives it away. But then again this book was plastered all over the book stores in the wake of the Twilight phenomena, so it was hard NOT to know what it's about. And I'm sorry that's the case, because spoilers stink, and the book would have been much more enjoyable if I didn't know what was really going on as I was reading.)

I really liked how the book combined historical fiction and fantasy fiction together, incorporating real historical figures from the Mayflower, Plimoth and Roanoke, and giving a fantastical explanation of what happened to these people. This book has its own very specific vampire mythology which is quite different from the other vampire mythos out there in the YA fiction universe right now. It combines vampire myth and another myth growing in YA fantasy popularity right now: fallen angels, with a very different take on that mythology as well. In this book, Blue Blood isn't just a term for a social class. It signifies a very specific type of person. One can also be a Red Blood or a Silver Blood. I wonder if the author had the 'Blue Blood' term first and came up with her book idea from that, or if the term came in later after she had already started writing. That would be interesting to discover at least for me, as I'm interested in the writing process in general.

It puts me off a bit that all the synopsizes I read told me this book was about a girl, as in one girl, named Schuyler (pronounced Sky-ler) Van Alen. However, the narrative gives as much time to Mimi Force and Bliss Llewlyn as well - two other girls who go to Schuyler's school, Duchesne. While these characters are richly developed and the author is able to shed a sympathetic light on the 'mean girls,' I think it ultimately displaces the reader from the book's emotion. I, as the reader, wanted to follow Schuyler's story, and instead kept hearing about Mimi and Bliss. Knowing these character's thoughts and vulnerabilities detracts from their impact on the storyline. For example, I was much more intrigued with the character of Mimi's twin brother, Jack, not because he is a boy, but because I didn't know everything about him.

I wasn't thrilled with the storyline because, well, there didn't appear to be one. Stuff happens, sure, and Schuyler, her friend Oliver, and the other characters all go on a self-discovery journey or the equivalent to find out who they really are and all that. But there wasn't really a climax. It was almost as though the whole first book was the build-up, and the climax will happen early in the second book (I can't say for sure, not having read the second book). I know I recently made this same criticism on The Ruins of Gorlan, but at least in that book there was a climax, however disappointing. This book didn't have one. It just ended. It's all well and good to set up stuff for the next book(s), but each book needs to have a beginning, middle and end!

This book wasn't bad, it just wasn't for me. I can only take so much of descriptions of Penthouses and Prada and handsome Italian boyfriends wrapped in expensive sports cars. Ick. If this book didn't have the fantasy elements in it I would have stopped listening/reading a while ago and cast it off as superficial frivolity. Also, it just doesn't have the universal appeal of teenage innocence and romance that Twilight has, and perhaps that is why it is only next to the Twilight books on the vampire bookstore display, and not center stage.

visit the author's website: http://melissa-delacruz.com/index.php/site/
Posted by BC at 9:00 AM