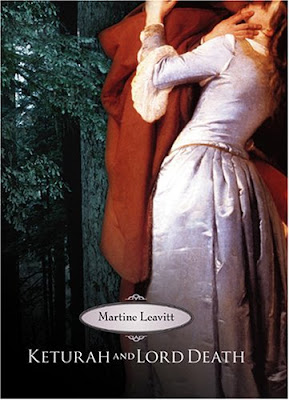 Synopsis from GoodReads: Martine Leavitt offers a spellbinding story, interweaving elements of classic fantasy and high romance. Keturah follows a legendary hart into the king's forest, where she becomes hopelessly lost. Her strength diminishes until, finally, she realizes that death is near. Little does she know that he is a young, handsome lord, melancholy and stern. Renowned for her storytelling, Keturah is able to charm Lord Death with a story and thereby gain a reprieve -- but only for twenty-four hours. She must find her one true love within that time, or all is lost. Keturah searches desperately while the village prepares for an unexpected visit from the king, and Keturah is thrust into a prominent role as mysterious happenings alarm her friends and neighbors. Lord Death's presence hovers over all until Keturah confronts him one last time in the harrowing climax.

I read this book on the recommendation of my cousin's friend, and I'm glad I did. I never would have heard of it otherwise!

This book reads like an old English fairy tale. It is beautiful in its innocence and quaintness. You really believe the protagonist, Keturah, is a sweet and naive sixteen-year-old girl from a small sheltered village in maybe the twelfth century. At first the setting may seem like the Middle Ages, but from the way the characters talk about their land as Angle Land, the easy belief in fairies and the superstitions of the townsfolk, it makes me think the time period is earlier. I love how the author creates a setting in which belief in fairy lore and superstitions is not only plausible, but downright palpable. The story is also redolent of The Arabian Nights, with Keturah forestalling death (literally) just as Scheherazade did, by telling him a story that breaks down his cold fearful exterior and makes him fall in love with her.

The summaries at the beginning of each chapter make me grin, because they are reminiscent of old novels written in the eighteenth century and probably before. For those of you unfamiliar with this style, they are a few short statements summarizing the events in the story that the chapter contains. Here is an example from the start of chapter four:


"What happens when I test the charm's power -- I ask Cook for a lemon -- an unexpected visitor --  John Temslin says: "We are doomed."
The summaries also hit their mark in their attempt to make us feel like we are reading an old story, as least they did for me. But maybe that's only because I was familiar with this practice from other old books I've read? I wonder what someone who had never come across this technique would think of it.

I've read some other reviews that say they don't like the ending. But honestly, what other ending could there be? I think the whole book would have seemed pointless if it had gone the other way, even though she accomplished what Lord Death asked of her. And speaking of Lord Death - what a unique take on this classic archetype! Making Death a young Lord, fearsome and apathetic, yet vulnerable and ultimately lonely puts new spin on the grim reaper figure. And thoughts of Hades taking Persephone as his bride inevitably come to mind.

The lemon theme ran quite prominently through the story, and I'm not aware of any lemon folklore or medicinal properties, but perhaps the lemon theme has a deeper meaning than I am able to see. Or perhaps it is just a story-telling tool. But in any case, I like how it highlighted how different this world is from ours. When lemons are a rare and privileged treat and even the manor's cook doesn't know what one looks like, you can clearly see the time period. In fact, the historical setting seemed almost to be a character itself, as a lot of the story only seems credible when the time period is taken into account.

This book, despite what it at first may appear considering the apparently morose subject matter, actually has many pieces of good, sound advice and also portrays a strong moral message. For example, Keturah's grandmother gives her a lesson it would be wise for most people to heed: "Now I will tell you a true thing, child, and if you are wise, you will remember it. The soul, it longs for its mate as much as the body. Sad it is, that the body be greedier than the soul. But if you would be happy all your days, as I was with your grandfather, subdue the body and marry the soul. Look for a soul and heart love." (disc 2 track 2)

I didn't like that Keturah had such a hard time finding her true love. Chalk it up to her innocent nature and sheltered life, I suppose, but the fact that it was John Temslin seemed to be staring her right in the face, and I just kept getting frustrated at her for not realizing it and not even considering that it could be him! I suppose it was necessary for her to have this revelation later in the story for pacing reasons, but I feel that this element could have been a bit less obvious.

I don't like this title, and I think the author could have come up with something more enticing. First of all, Keturah. I don't like it when made-up character or place names are in a title. (Example: Harry Potter and the Prisoner of Azkaban) It's immediately foreign to the eye and therefore right from the get-go it's hard for the reader to connect with it. Secondly, Lord Death. The 'Lord' title could be construed as a figure to be worshiped (instead of the title for English gentry), especially when paired with 'Death.' Then you get the whole Satan worship connotation and it's just messy. So no, I don't like the title, sorry.

Overall, a sweet enchanting tale that has a lot of interesting things to say about the nature of love, death, and life.

Find it on Amazon: Keturah And Lord Death

Visit the author's website: www.martineleavitt.com/
Posted by BC at 9:00 AM