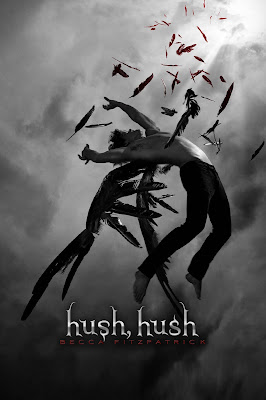 Synopsis from GoodReads: For Nora Grey, romance was not part of the plan. She's never been particularly attracted to the boys at her school, no matter how much her best friend, Vee, pushes them at her...until Patch comes along. With his easy smile and eyes that seem to see inside her, Nora is drawn to him against her better judgment, but after a series of terrifying encounters, Nora's not sure whom to trust. Patch seems to be everywhere she is, and to know more about her than her closest friends. She can't decide whether she should fall into his arms or run and hide. And when she tries to seek some answers, she finds herself near a truth that is far more unsettling than anything Patch makes her feel. For Nora is right in the middle of an ancient battle between the immortal and those that have fallen - and when it comes to choosing sides, the wrong choice will cost her life.

I love the prologue in this book. Very mysterious and intriguing. It hooks you immediately by virtue of it's historical time period, the enigmatic figure involved, and the oath sworn that leaves the reader wondering how it will play into the main thread of the novel.

The opening chapter, however, is another matter. The excitement I received from the short prologue fizzled as I started on chapter one. First off, the setting is a high school biology lesson on the reproductive system. Yawn. Can't authors come up with something a bit different from the worn out 'sex lesson' gag? I mean, come on, it's been done a million times. But, maybe if you're a budding teenager and haven't read a ton of books, this will be a new subject for you. So fine, but it seems worn out to me.

I'm not sure how I feel about this title. It's sort of like Twilight (again) in the sense that it doesn't have anything to do with the book, and just sounds enticing to draw readers in. And I don't normally comment of cover art but man, what a photo! I've seen a lot of bloggers write they picked up this book for the cover alone, and with this one, I really can't blame them.

I really like the relationship between Nora and Vee. It felt like a realistic teenager friendship between two girls. They got pissed at each other, they had each other's backs, they fought about things and they joked about things. However, I would just like to know what sort of name Vee Sky is. Frankly, it sounds kind of like a hooker name. Just sayin'. But another reason why I liked this relationship is because Nora's best friend is a GIRL! Too many YA books I've read lately feature a female protagonist with a male best friend. And honestly how common is that? Not very. So thank you, Ms. Fitzpatrick, for writing this relationship into your book.

I liked the twist at the end. I could see it coming, but not in the exact form it took, so that was nice. But I also feel like it was over too soon and I didn't get enough back-story to feel satisfied with this ending. I hope there will be more back-story in the sequel, Crescendo

, as it's one of my favorite parts of a story and I would like to see more of Patch's history.

The main thread of the mythology tying this book together - concerning the Book of Enoch, what happened to other Fallen Angels, etc. - was a bit confusing to me and it made me uncertain of Patch's motives. I think this is because he is debating between two paths he can take and it is unclear at points if he has chosen one path over the other or if he is still considering what to do. I can't explain it much more than that without totally giving everything away. But lets just say the hotel room scene was a little confusing. I had to go back and read the flashback scene with Dabria's 'real' introduction to really understand what was going on, and even then I wasn't sure until later.

Patch was channeling Edward Cullen here. The way he guides Nora through murky waters of concealment, giving her just enough to keep her chomping at the bit. Also the way he almost commands her to do or not do certain things, and she blindly obeys because of her infatuation with him. Oh, and also the fact that she is scared of him yet drawn to him at the same time. Totally Twilight. And of course girls love the bad boy. This is not a judgment, merely an observation.

"You're impinging on my private space," I said, inching backward.

Love it! Mainly because I have gotten similar reactions when using uncommon words in regular speech, and also because I am currently studying for the GREs and trying to memorize loads of vocab words!

Overall, it wasn't what I thought it was going to be, but I wasn't disappointed.

Find it on Amazon: Hush, Hush

Visit the author's website: http://beccafitzpatrick.com/
Posted by BC at 9:00 AM