Review: The Sorcerer of Sainte Felice 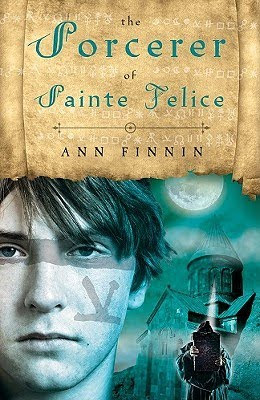 Synopsis from the paperback back cover: Condemned to death by the Holy Office for sorcery, fifteen-year-old Michael de Lorraine is rescued from the flames by Abbot Francis and granted refuge at the Sainte Felice, a Benedictine monastery in fifteenth-century France. Michael learns that this strange and wonderful place, famous for its healing wine, harbors renegade monk-sorcerers, enchanted gargoyles, and a closely guarded secret that could spell violent death for the Abbot.

As the church intensifies its cruel pursuit of Micheal, Abbot Francis and the wizard monks find themselves grave danger. Michael will do anything to protect his mentor, but are his own magical powers great enough to save the monastery from the merciless, bloodthirsty Inquisition?

As urban fantasy is the the craze right now, I think some young readers may see a book about a fifteenth century monastery as backwards and out of touch. As a reader I think you really have to be able to appreciate the historical period in this book to find it interesting, so it may not be for everyone. But for what it was, I enjoyed it. And I think I might have enjoyed it even more if I had read it when I was younger.

The blurb on the back cover of this paperback made me think that the monks at this monastery had found a way to amalgamate the Christian faith and belief in the teachings of the Bible with the magical arts like astrology and medicinal herbs and the like. However, once I started to read, it sounded at first like the monastery was simply a cover for the 'monks' to practice their sorcery unhindered. However at the same time, Abbott Francis says he is truly a monk and that the vows he took mean something. But the confirmation that the monks truly did believe in God and prayer didn't come until late in the book when the reserved Brother John speaks up:

"John turned on all of us with a rare flash of anger in his pale eyes. "Have our hearts become so hardened and so cynical that we so totally discount the power of prayer?" he demanded. "If so, then we are no better than the pompous and hypocritical Church from which we have fled. Which one of us, in his darkest hour, did not raise his voice to heaven and have it answered by the hand of the Almighty, leading us to this door? And now we dare to look down our monkish noses at the sincere prayers of the townspeople who want not their own succor but that of our abbot? We ought to be ashamed."" p. 266

There is significant discussion about the difference between a saint and a sorcerer. Is Abbott Francis one or the other? He certainly started out as a sorcerer, but through his genuine concern and charity for the people of Sainte Felice, has he indeed become a Saint while still practicing magic? Can he be both? I think the point is that it all depends on how you look at it. The term Sacred Magician is also mentioned a few times, and while this title is not fully explained, I think it supposed to encompass both sorcerer and saint.

Michael sums up the happy coexistence of magic and spirituality when he comes to a realization about Abbot Francis here:

"I realized then why they revered him so. It was not just the bleeding statues or the vision of angels. He lifted their spirits and offered them hope for a better life in this world, not just salvation in the next. He had cast a magical spell on them, but it was a spell of comfort and love that enveloped all the bodies packed like herring into the tiny stone church, a spell like a blazing fire warming the hearts and souls of all those who had ventured forth on this bitterly cold midwinter's morning. I found that I too was moved." p. 252

This book comes full circle from Michael being burned at the stake to Francis being brought to the pyre. I appreciate the symmetry of that.

Micheal calls the pious townsfolk superstitious on more than one occasion, and I think it's a bit modern for Michael to think of the Christian faith as superstitious nonsense. Absolutely everyone was influenced by the Church back then, and even if he had an aversion to the establishment, I don't think he would have simply swept the whole religion aside as superstition.

After the initial exciting scene that draws you into the book, the story progresses slowly and a bit monotonously for a while. But I suppose it's hard to keep the action up when the setting of your book is a serene monetary. Mealtimes are the markers by which she measures all events that take place, and in fact much of the book takes place at supper and dinner, as that is where the monks primary dialogue lies for the first two-thirds of the book - and the endless and repetitive manner of these mealtimes makes the days seem like they are in an endless loop. I think this also contributes to the strange sense of pacing. The conflict that serves as the climax for the book is not introduced until page 290, and up to that point the pacing is very slow.

This book really hits it's stride in the last third when the conflict that leads to the climax is introduced. This part is so much better than the rest of the book that I would guess Finnin wrote this first, and filled in the rest later with less skilled storytelling. The Cardinal's visit to the monastery especially stood out as feeling labored and filled with unnecessary detail.

I've never heard of Flux publishing before, and maybe this is just a fluke, but there are so many typos and mistakes in the text that it does not even seem like it had a final edit before going to press. Dropped prepositions, doubled pronouns and mismatched tense are common throughout the book. These mistakes are prevalent enough to be distracting, but what's worse, is fumbled key plot-points. For example, when the monks perform their first magical summoning in the Tabernacle, they invoke the spirits of the four elements - Air, Fire, Water and Earth - to protect them from evil. But the typo fudges up part of the explanation, listing air twice and earth none. That's a big boo-boo.

Overall I liked it, (even though I know I sound very critical!) but I wanted to delve more into the meat and potatoes of this book: the magic. I wanted more of Antonin's astrology, more of Francis's sorcery past and secrets of the grimoire, more explanation as to why the wine has miraculous healing properties. Just more. There was too much hum-drum and not enough titillating tidbits that would make me want to devour this book.

Get it on Amazon: The Sorcerer of Sainte Felice