Review: The Merchant of Death 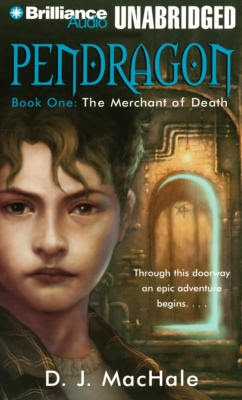 The Merchant of Death by D.J. McHale

Synopsis from GoodReads: Bobby Pendragon is a seemingly normal fourteen-year-old boy. He has a family, a home, and even Marley, his beloved dog. But there is something very special about Bobby.

He is going to save the world.

And not just Earth as we know it. Bobby is slowly starting to realize that life in the cosmos isn't quite what he thought it was. And before he can object, he is swept off to an alternate dimension known as Denduron, a territory inhabited by strange beings, ruled by a magical tyrant, and plagued by dangerous revolution.
If Bobby wants to see his family again, he's going to have to accept his role as savior, and accept it wholeheartedly. Because, as he is about to discover, Denduron is only the beginning....

This book is great. The premise is unique. The action is compelling while not over-whelming. The storytelling gives you just enough to leave you craving more at each turn. However, this book was written for Middle Grade boys. And as most of you book bloggers out there are not Middle Grade boys, it may not appeal. But for it's target audience I think it was spot on.

The book is told through long letters Bobby writes to his friends. The letter idea works where you'd think it wouldn't. The large chunks of Bobby's first person narrative that switch to Mark and Courtney's third person when they are not reading Bobby's letters actually gives the reader a refreshing change once in a while. It's not distracting because McHale makes it clear that this is Bobby's story, so the parts with Mark and Courtney do not threaten that or bore us by taking us away from the main storyline.

I liked Bobby's character. He felt very real, like how an actual kid would reaction to the situations he was in. McHale does a great job of giving Bobby a very specific and age-appropriate voice. And I would think he would be good at this, seeeing as how McHale was a screenwriter for such TV shows as Are You Afraid of the Dark? and Ghostwritter (among a ton of other things) both of which I absolutely adored as a kid.

I wonder at the name "Press." At first I thought it might be short for something more revealing that would later tell us something about Bobby's mysterious uncle, but that never happened.

A few issues I had with it:

When you see the name "Pendragon" sprawled across the cover of a book in big block letters, what do you immediately think of? I don't know about you, but I think of Arthur Pendragon, Camelot, Merlin, Guinevere, Lancelot, etc. This book, however, had nothing to do with Arthurian legends and that put a big of a sour taste in my mouth. Yes, I know, authors use names from other literary works or from folklore as an allusion to characteristics that name invokes, but the Pendragon name is so unique and so iconic (at least to me) that it is just not believable as anyone else's name. I don't care if your story is amazing enough to be able to support the weight that name holds. But maybe McHale thought using the name was a clever allegory to the fact that Bobby, like Arthur, was a wimpy little boy plucked from seeming obscurity to rescue a whole nation of people. But even I think I'm stretching a bit to make this comparison work, so I don't think that was the case. So sorry, but I think it's a bit presumptuous to use a name like Pendragon and not even acknowledge it's prestigious origins.

There were alot of unanswered questions at the end of this book, and alot that was simply not explained about the nature of travelers, their skills, their origins, their purpose, etc. Also, the "Earth" Bobby and his friends live on is referred to as "Second Earth" throughout the book. I'd liked to have discovered what the deal with that was, and even Bobby wonders what happened to "First Earth." But I as this series has ten books in it, I suppose the author couldn't give away everything in the first book.

If I was a twelve year old boy, I would definitely be excited to read the rest of the books in this series, and I just might recommend it to some young men I know...

Find it on Amazon: The Merchant of Death (Pendragon Series #1)

Visit the author's website: http://djmachalebooks.com/
Posted by BC at 9:00 AM